Mavisel Yeneris one of the pioneers of children’s and young adult literature in Turkey. She has been active since 1998 in the literary world, and since then she has been one of the most creative and productive authors of Turkey. She has won many acclaimed awards and honors besides being selected for the Found In Translationanthology, an anthology that honors the best children’s literature works in the world. However, the most important of them all, she has gained a wide popularity among children in a world the number of readers are diminishing rapidly. She offers a magical world to children, reminding them the wonders of reading.

One of the most important features of Yener’s works is her language. She has a simple and pure tone. She uses the language skillfully and a strong advocate of using genuine mother tongue. She is the first children’s author to use genuine native words instead of foreign words assimilated into Turkish, such as computer and fax machine. With that she not only exhibits the beauties of her native language but also helps preserving the language. She aspires to raise language awareness. 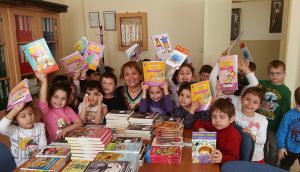 Another important feature of Yener’s works is their universalness. There are socially, economically, culturally diverse classes in Turkey. Being able to touch the souls and minds of all children from these diverse classes, to address them in an equally compelling manner, to unite them in one adventure that speaks to them all is nearly impossible. However, with her word plays, humorous tone, thought-provoking themes, intriguing subjects she achieves to speak to all the children of the world regardless of their social statuses, religion, gender, and where they live. In Yener’s literary world children are children and therefore they should be able to enjoy same things. A boy from a remote village will equally relate to and enjoy her works as much as a girl from a big city.

Children’s world is different than the world of grown-ups and it is essential to speak the language of children. Yener speaks this language fluently. Her creativity exceeds the limits of grown-ups’ imaginations; she has a childlike imagination of her own. Her poetic tone, imaginative characters, playful language in her fiction cherishes children’s world.

Yener’s works promise a good time. But Yener also believes in encouraging children to think and learn. In the works of Yener, there are embedded messages that encourage self-development such as taking responsibility, not being prejudiced, being considerate, selflessness, empathy, being respectful to others’ ideas and honesty; that support social-development such as helping others, equality, being respectful to others’ rights and sharing; that promote national awareness such as language awareness and environment awareness; and that boost universal awareness such as living in peace. However, Yener never employs a didactic tone; she never forces these messages but gives them so skillfully that they don’t alienate the reader.

In all her works, Yener has only one objective: to children for children. Yener has devoted her life to children’s and young adult literature and this devotion predominates every other thing. She does not attempt to stand out as an author, make a name for herself. In short, she is not an idiocentric author. To achieve her objective, she even united her literary force with Aytül Akal in some of her works. Their poetry, novel, creative writing collaborations not only won awards but also offer a polyvocal world for children.

Yener is an important figure in children’s and young adult literature because of her dedication, her language, her approach, her ceaseless effort in producing for children and in overall her contributions to the field.