You’ve picked up a book and started reading it. All of sudden, you come across a warning that reads:

“Of all those books, it cannot be a coincidence that you have chosen this particular one, could it? Now, you and I must make a pact. As you start reading this tale, you must know that, either you must carry this mystery until the end, or you must stop reading right away. Because it came to you from streams and hills, passing through fiery waters and smoky mountains.

“No matter in which era your world is, you must find the mystery within the source of the water’s fire. My tale is going to bring you to the Blue Time, inside a bathhouse so you can solve the mystery.

“Don’t you ever say that the bathhouse has no dome, no bowl, no basin, no water! Here’s a first hint for you. The most beautiful Nymph is still bathing there.”

What would you if youwere to come across such a warning? Would you put it back immediately or would you continue reading and try to solve the mystery behind it? 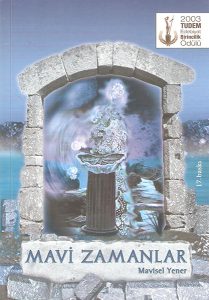 Birce is a stubborn girl. She would never back down. Birce, a bookworm, cannot stop reading the book Ways to Find Secret Passages ever since she picked it up from the bookstore… She does not just read book but writes stories too. Moreover one of the stories she penned wins her an award in a contest among elementary schools. In that moment the mystery behind the book is revealed or perhaps it gets more complicated. Because Birce finds herself in an archeological excavation site as well as in a tale at the same time. After winning a one week vacation in an archeological excavation site as the reward of the contest she meets with Işıl, Sevilay, Aktan and Gilman there. After a while they will find themselves in the tale and mystery this red covered book tells just like Birce. While youngsters try to solve the mystery of the Nymph and the Storyteller of the Full Moon, İbrahim, Reşat, Necip and Tony are planning to change the world. Realities and Fantasiesintersect; lives cross paths at the mystery of the nymph. Who knows what is real and what is imagination?

Adolescence period is a rough. The never-ending anxieties, problems, fears… Love affairs, vulnerabilities, friendships… Wild spirited youngsters who suffer in between when expectations of parents and the society are added to the equation… With everything that happens the week Birce and her friends spend in the excavation site feels like it lasted a life time. Traveling back and forth through past, present and future, they acquaint with themselves and get to know people all the while trying to solve the mystery of the nymph.

Every detail in this well-crafted story has a mystery to it. In the multilayered plot of the story there aren’t only the problems of the adolescence period. It also consists of social concerns: Allianoi! Ancient healing center Allianoi that will be destructed just like Zeugma after being flooded by the Yortanlı Dam is where the story takes place… Beauties of the Aegean can be seen in ever line of the book, we get pulled into the nature that we’ve been long estranged. All those fragrances and sights we’ve missed…

“The warm breeze revived the smell of herbs, slowly wandering for a bit across the skirts of the valley across Allianoi before rising towards the peaks of the distant mountains. In an unexpected moment of the night, the obscurity suddenly turned to morning. A giant ball burst out of the trees, distributing hope to the hopeless and love to the lovers, it went on and on to finally stop at the top of a mountain imbued in herb smells.

“The mountain with its precise and smooth lines, as if it was trimmed by the sword of a tale’s giant villain, was gradually rising higher and higher. It seemed like it was multiplying and growing under the spell of a wizard facing the giant.

“The silver-coloured night birds perched like soaring eagles on the peak of the mountain whose lines seemed to have been drawn by moonlight. Their eyes gazed upon the stars.

“At every full moon, the blue winged butterfly, the caterpillar that forgot to sleep and the dragonflies moving fast towards the light would all experience the excitement of a young girl on her way to meet her boyfriend for the first time. Just like that night… When the moonlight washed in the Ilya, the sky and the earth kept silent. Not a single sound could be heard.

“The kids uncovered the entrance of the tunnel and jumped in.”

Nowadays, Allianoi is silently screaming again. Last week it was announced that the institution that had been sponsoring the excavation for the last three years was withdrawing its support and the excavation work that had been going on for seven years were to come to a halt. However only 10% of the health center had been unearthed. Who knows what is still under the ground and what we’ll miss out!

Mavisel Yener’s book Blue Times is Allianoi’s silent scream! While we’re anxious to see if Allianoi will face the same tragedy as Zeugma, let’s hear out what the Aphrodite statue that was unearthed in the excavation has to say to from the voice of the nymph in the novel…

“The Nymph had forgotten humanity’s greed. She knew of the only way to protect North and South.

“If human beings were one day to move the Nymph’s origins that extend to the centre of the Earth, the healing fire would belch flames again…

“…The eyes that can follow the traces will see the Full Moon Storyteller’s hints. Go to her nest and save the Nymph’s twin.”

With this book, Yener won the 2003 TUDEM Literature Award for Young Adult in novel category. One can feel that the author put long hours to this book, handled every piece like it was from an archeological dig and penned every word with the sensibility as an Aegean. In this book there here is history, archeology, mythology… While talking about all these, Yener managed to hook her readers to the story. Instead of boring them with old documents, she talks about old times in today’s terms.

“Looking carefully at the statue he just found, Bülent said, ‘I think there’s a crack on the head!’

Arzu added a romantic tone to her voice and spoke,

‘A mermaid used to live on the crystal mountain. For thousands of years she would cry, ‘Ah, if only Bülent could save me!’ But she was crackers…’

‘What is a mermaid doing in the mountains, Arzu?’

‘She’s also crackers or what?’”

How can we talk about young adult novels without also talking about a ‘love’. This book is no exception. Moreover, it is such a secret and at the same time obvious love that it will make you reread the novel looking for traces of it!

“Of all those books, it cannot be a coincidence that you have chosen this particular one, could it?” says the red book. Our realities and dreams collide in Allianoi; all lives unite in the mystery of the nymph. Are the things that happen in Allianoi real or a dream? Allianoi is slipping away from our fingers… Are we asleep? Are we aware of it?

THIS CLASS IS SOMETHING ELSE!