The Library of Eternity

EVERYTHING YOU ENCOUNTER IS A WINDOW TO ETERNITY!

An intertextuality that breathes new life into classical fairy tale heroes…Even the hopeful neighs of Rocinante’s, who “is exhausted from carrying huge dreams of Don Quixote,” rise above the words. Some of the “directors of imagination” and protagonists (such as Pinocchio, Carlo Collodi, Aesop, Jules Verne, Alice, Woggle-Bug, Winged Monkey*, Captain Ahab and Pippi Longstocking) are directly involved in the book’s conflict and fiction while others (such as Deli Dumrul, Kelile and Dimne) are reminded to us with their eternal marks. Of course, intertextual structure includes various quotes and references.

A plotline in a fantasy world where all time exists simultaneously… The plot line winks at science fiction in the beginning and the end of the book within a secondary plot. With “artificial intelligence’s” metallic voice, author (The “director of imagination” of The Library of Eternity) resurrects as a memory-being hundreds of years later.

A fun text that is full of surprises, whose premise is ageless, and in which the classical protagonists’ revived souls carry freshness and energy… An Aesop skating through town square going to work, an Alice that is making mustard balls with the recipe she had found in the first cookbook written in Middle Age, and many more… 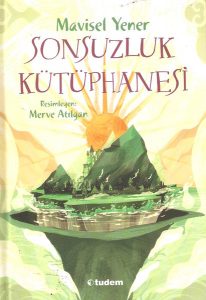 Pinocchio, who desperately desires to become a real boy, ends up in Maskanunka island after incredibly challenging adventures. (Pinocchio’s letter to “directors of imagination”Collodi and their encounter towards the end of the book are interesting both in terms of fictional protagonist’s function and author-protagonist confrontation. Pinocchio has been ‘miserable’ in those challenging adventures and is angry at Collodi.) On the island where Library of Eternity is, Pinocchio meets Professor Hat, who is the keeper of the library and the grandchild of its founder, Professor Woggle-Bug. The island’s overseer President With Troubles is worried about the wellbeing of his son Aesop who claims that he can talk to animals and is telling stories about them. President With Troubles is worried that his son has contracted “imagination syndrome”. Other children has contracted this “syndrome” as well. President With Troubles has a problem with “imagination,” he sees imagination as a threat to the country’s future and thus declares reading books illegal. 20 years passes by since the declaration of this ban, and the price is steep: About 95% of every Maskanunda citizen’s brains have become eroded and they have become stupider. (There is no way we can continue without mentioning dear Ursula K. Le Guin here with this quote: “I doubt that the imagination can be suppressed. If you truly eradicated it in a child, he would grow up to be an eggplant.) Well, this is exactly what happens to island’s citizens: They become unable to learn, find solutions to problems, reason, understand each other, and they become prone to violence… The book’s “directors of imagination” depicts the silliness of the island residents both during the part set in the parliament and the part where they are trying to get rid of the Winged Monkey in a fun, merry way. Solving this huge problem, the main conflict, again falls upon the classical fairy tale protagonists. They solve it together: With the plan which Aesop, who never lost his ability to imagine and to speak with animals, and Professor Hat come up together, and with creative efforts of Jules Verne, Alice, Winged Monkey, Pippi Longstocking and Pinocchio.

The Library of Eternity is the written memory of imagination and creativity; it contains the ancient knowledge of earth and infinite variety of states of being of humans. In an age which attaches importance to social and political measures against the misuse of astonishing technological advancements, we are not living in a cultural environment that is mature enough to direct these advances to the benefit of humanity. (In this environment, the members of parliament of Maskanunka island reminds us of the uniformity, viewpoints and self-interested attitude of many people with and without administrative authority in today’s world.) Protecting the memory in question and its future are parts of this“advancement” problem and the concern of the destruction of humanity. The author’s main premise of this book is built upon this fact. In this technological flow, could immortality in virtual world be possible, and if so, in what conditions?

The mysteries of the legends of “Humanity’s black box”Golden Book and “monument of wisdom” relativizes reality and fiction and blurs the borders between them: “Don’t try to comprehend limitless imagination with a limited mind, Pinocchio!” Because everything you encounter is a window to eternity. The relativity in question is again encountered via “director of imagination’s” approach to book protagonists. When asked whether the protagonist of the book is Pinocchio, Aesop or Professor Hat, the hologram gives this reply: “Stop asking outdated questions. Adopt a multi-reality point of view. Why should a book has to have a single protagonist? Each time you read the book, the protagonist will change depending on where you stand, because your point of view will change too.

Perhaps a different cover image could be chosen for a book in which many merry protagonists hang about, but still, I have to mention that the illustrations of Merve Atılgan truly capture the joyous spirit of the book.

I will end this review with a quote from Ursula K. Le Guin that embraces the book and its theme: The advantage of works created with imagination is understanding world, people around you, your own emotions and your destiny thoroughly.

AN INTERVIEW WITH MAVISEL YENER

WE ARE ALL MUSICAL NOTES