Let’s have a look inside the Mavisel Yener’s book which won the prize at the last year’s literary contest[1]. Mavisel Yener is an author enamored with the color blue just as her name[2]. She lives in a blue city, İzmir[3].In her children’s story titled The Blue Apple, a nine-day journey to Antalya is told through the eyes of young Birce. 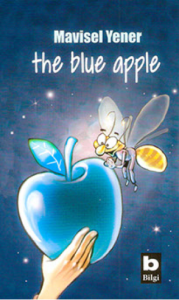 Birce is a girl who likes writing letters to herself and leaving them on her desk before going on vacations to read when she gets back. The readers set on a journey with Birce who after leaving a letter on her desk that starts off as “Who knows what you will have experienced when you return to this room nine days later,” goes on telling about her trip to Antalya. But this journey does not take place in Antalya. Because their trip turns into a prolonged magical adventure among stalactites and stalagmites after Birce and her father get lost in the Insuyu Cave in Burdur.

The dance of bats, fireflies, and the Cave Wanderer -an oldster with crimson beard and wrinkled face- who helps them find the way out of the cave… After this encounter, Mavisel Yener brings the reader into a complete fairy tale world.

This time Birce, who was introduced for the first time in Mavisel Yener’s The Blue Applethat was first published in 1998, appears in The Blue Timesas a student who wins the second prize in the fairy tale writing contest for the elementary school students. Along the way, Birce wins the Tudem Fiction Prize for her author.

In The Blue Times, reader shares the one week trip that Birce goes to with her friends who won the fairy tale writing contest. Where to, you ask? To the excavation site of an ancient city that was also a healing center that was founded in the 2ndcentury B.C.. To Allianoi in Pergamum. Allianoi, known as the Zeugma of the Aegean due to the fact that it will be flooded by the water from the Yortanlı Dam,[4] was founded in the Hellenistic era. It’s one of the most important medical centers in the history due to healing waters and spas. With Birce and her friends the reader learns about this ancient city, the Nymph sculpture, two-thousand-year-old stones, the clay pots, and bowls. The guide of Birce and her friends is a book, Ways to Find Secret Passages, rather than the excavation team. The narrator in that book tells that he learned these secrets from the Full Moon Storyteller of the Blue Times.

On the back cover it reads:

Are you ready to set off to the Blue Times? Just take this book and your heart with you. Go on without fear. The one that illuminates your path is the full moon.

Although it’s a children’s book, The Blue Timesis a novel that adults, too, won’t be able to resist to leaf through its pages enjoying, wandering what will happen next. It is masterfully crafted.

The author, Mavisel Yener, was born in Ankara in 1962. She graduated from Ege University’s Faculty of Dentistry. However, she dedicated herself to the children’s literature. She won many awards with her fairy tales and stories. She loves wandering in the worlds of children and the fairy tales.

[3]Here the writer refers to the Gulf of Izmir.

[4]After protests from ICOMOS, UNESCO, Europa Nostra, EU and local NGOs, discussions and a long legal battle in regards to preserving Allianoi, the site was flooded and destructed in February 2011.

A BOOK ABOUT SOCIAL MEMORY