What Spills Out From Storier Grandpa’s Chest Of Tales

The main character of The Taffy Appleland -a land that Yener created with her humorous style- is the purple-bearded, crimson-haired Storier Grandpa. She both tells beautiful tales and encourages her little readers to think about how fairy tales first came to be.

Have you ever thought about who finds from where and brings forward those fairy tales that nourish the thoughts and dreams of all people regardless of their age? If we are to take folkloric and language studies into account, we know that people like Grimm Brothers collected them travelling from land to land, and presented to us. Well, taking the fiction itself into account, what if this time we were to imagine how those tales were composed in the first place? If you believe in the funny little man living who lives on the moon and tells stories to those on the Earth, or in white bearded Santa Claus who brings sacks of toys to the children living all around the world, consider also the possibility of a Grandpa who travels between planets and collects fairy tales in a chest in order to deliver to us. This sweet possibility comes true in The Taffy Appleland, the latest book of Mavisel Yener -one of the most productive authors in the children’s literature-, in the best way of tale telling possible. 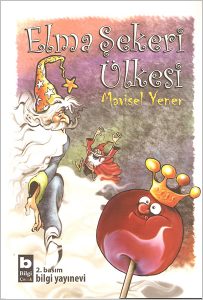 We know how much Yener loves pondering on the nature of tales with her excellent humorous style and making it the concern of her fiction by means of her other works like Runaway Tale and The Storyteller’s Letter. With a similar approach in The Taffy Appleland, as she tells us tales she makes how fairy tales came to be the outline of her story. As the purple-bearded, crimson-haired Storier Grandpa -main character of this book- travels to different planets and lands except for the Earth and Venus for the sake of presenting us fairy tales, his journey becomes a fairy tale in itself.

Not confining himself to tales of the Earth, Storier Grandpa goes on a business trip starting from the planet of Zologa in order to gather the freshest fairy tales. I should tell you in advance that during his trip he collects tales that will satisfy us very much; don’t you think for a second that it’s an easy task to accomplish. Because those who, in order to become a fairy tale character in Storier Grandpa’s chest, throw fits of caprice and are brown noses are cloying. Fortunately, our Grandpa is so well versed in his work that he knows well how to defeat all kinds of greed in a wise and kind manner. For example, an angry citizen of Zologa who wants to be a hero by fighting his shadow both misses the contest of wisdom and takes his share from Grandpa’s chest of wisdom. And these are the morals that we are used to receiving at the end of each story.

RESIDENTS OF PLANET OF ZOLOGA

With whom does Storier Grandpa meet in other galaxies that he would make a fairy tale character in his chest, you ask? Those who keenly pick on each other during the wisdom contest in Zologa; honest ones who succeed without considering attacking to others necessary like Chabi and unsportsmanlike ones like jealous Mula; rabbits who are always trying to get to places on time and carry pocket watches just in Alice In Wonderland. Those are just a few of colorful characters that become a fairy tale character in the Grandpa’s chest of tales. Especially one of them reminds us of the German fairy tale character Struwwelpeter who refuses to have his nails and hair cut, and so, scares everyone around him with his scissors-like long nails and thorn-like hair: this 8-years-old little girl named Nebula wants to make cookies for everyone, but she sees that no one wants to eat her cookies. Why, you ask? Because Nebula has ignored to clean her nails till the then. And she isn’t aware of the nickname her friends have given her: “The President of Germ-Protection Club”.

One of the most significant aspects of The Taffy Applelandis the language Mavisel Yener uses while telling her tales -each of which is more enjoyable and humorous than the other. It’s a tone both beneficial for the book’s own world and benefitting from the traditional story-telling discourse.

For instance, in the opening lines of the tales princes still set out to seek their fortunes but tales that star off as “Once upon a time,” continues as, “in a haystack of galaxies where alien race and a space flea’s place… As twinkled twinkled the little star, there lived a cat named Raggedy on the sky…” Moreover, I won’t tell you what it is but there is a surprise waiting for you at the end of the book.

A FAIRY TALE UNIVERSE IN...

I WISH I WERE A CLOWN